This section of the course revolves around checking and interacting with other students work in order to generate dialogue/ networks between students and to field test their ideas for a Future Cultures Digital Artefact. In the spirit of this, as well as in order to complete the assigned assignment, I have analysed and commented on three such BETA presentations.

Ty’s series of video really excited me, in the same way a world wildlife documentary excites me: I wasn’t shocked by the content, there are always Futurologists in these subjects. I only had a single issue and that was with distribution, something I return to in the third Beta, i suggested he take his content across more then the most popular platforms and build other audiences, to solve his issues with n o traffic to his DA and thus no feedback to inform his iterations.

Louise’s DA was quite interesting and fresh, as a third year I have done a lot of these but never have I encountered a Cosplay themed DA, I have had a lot of podcasts and Instagram Pages but never an advert to promote a sub genre of fashion/Role Play. I threw a example video at her, one that meshed with my theme a small amount, linked to my role play and DND theme a little bit. The link is something I discovered while researching my own DA and is an example of the relationship between the ideas of Character Generation and Cosplay. Cant have a character to play without the character. 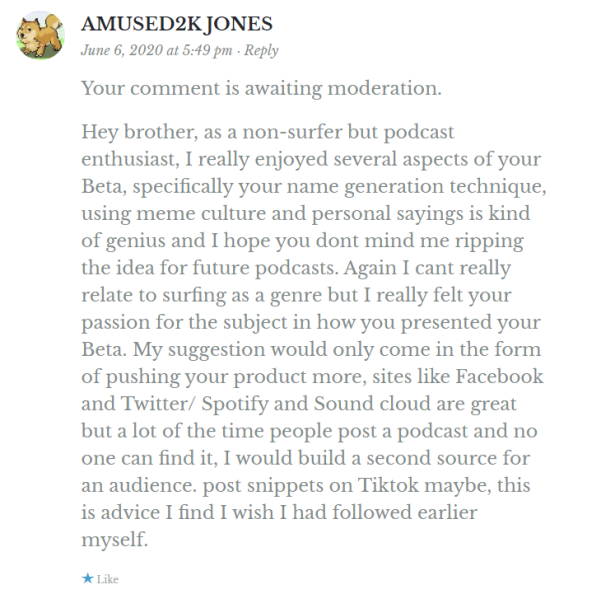 Connor’s series of sound cloud podcasts had me reeling, as I am not a surfer guy, something that made it quite difficult for me to relate/ find ways to assist his BETA. This is part of the reason why I found myself repeating the advice from Ty’s Beta on building a second platform, specifically because there are hundreds of surfer podcasts, you would need a mad edge to get ahead of the other.

My core advice for my classmates was to build a second audience on Tiktok as an example, this is due to the rare time we find ourselves in, where a social platform is exploding around us and we have an opportunity to ride said explosion to success.